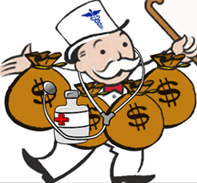 In my last post I documented how corporations are lurching into the classrooms of America’s declining public education system. In the this recent piece for Vice.com, I document how Wall St is putting on the white jacket and playing doctor with America’s medical system. Where the nation’s hospitals aren’t being handed to realtors they are being bought out by the likes of Bain Capital and Blackstone Group. It’s a prescription for death:

[Hospital Corporation of America] instructed its admissions staff to determine whether the ailments of those seeking treatment were life threatening. If not, they were told to pay up in advance or were shown the door. In 2009, a patient with an artificial heart valve complaining of a fever was 86’d from HCA’s Northside Hospital in St. Petersburg, Florida, only to die of related respiratory problems three days later. HCA eventuallypaid $38,000 in fines to the Department of Health and Human Services. Meanwhile, no action has been taken against HCA over its billing practices and a former executive with the corporation, Marilyn Tavenner, is currently acting administrator of the government’s Medicare and Medicaid programs. The expansion of Medicaid coverage scheduled for 2014 under the Affordable Care Act, could offer HCA—along with those in the industry following their lead—a fresh pool of patients to over bill.

The piece also focuses on Brooklyn’s Long Island College Hospital, which the State University of New York wants to close and potentially auction off, according to critics. On Sunday, patients, caregivers and unions representing staff at the hospital will rally to keep the 155-year-old institution open. More on that here.