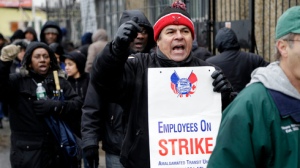 The wheels on New York City’s school buses aren’t going round. In what’s becoming a familiar song these days in America: education workers resisting attempts to balance budgets on their backs at the expense of students learning.

The current school bus strike in the Big Apple is no exception.

Last week’s walkout follows a successful strike by the Chicago Teachers Union last year against layoffs and the knotting of pay to standardized test results. Before that, teachers were a leading force in the 2011 occupation of Wisconsin’s capitol building in opposition to legislation that stripped state employees of collective bargaining rights. The measure passed but large sections of it were later ruled unconstitutional. And those who slept on the marble floors of Madison laid the groundwork for what would become Occupy Wall Street and the Occupy movement, challenging austerity amidst the worst economic crisis since the depression.

It’s in this atmosphere of heightened class conflict that the union representing New York City drivers, attendants and mechanics – who are responsible for transporting over 150,000 students in the country’s largest school district – called a strike. New York’s billionaire Mayor Michael Bloomberg and his Schools Chancellor Denise Walcott are looking to nix employee protections that enable workers to keep their jobs when bus routes pass from one contractor to another.

Bloomberg has hinted that replacement drivers could be handed keys as early as Tuesday morning, January 22, a move that will likely escalate the dispute.

“They got scab drivers that are going to be coming in,” said Sergio Fuerges, who escorts special needs children to school in the Bronx. “They’ll be working for less money, with a lot less experience doing these runs.”

At the heart of the dispute are “Employee Protection Provisions,” or EPPs, which defend workers from layoffs when bus lines are passed from contractor to contractor. In February, the city plans to open the special needs routes that Fuerges and other senior drivers navigate each school day to bidders exempted from EPPs.

Citing a 2011 New York State Court of Appeals ruling that declared the employee protections anti-competitive and struck the provisions down, the Bloomberg/Walcott duo say their hands are tied. However, legislation passed in Albany last year would have enshrined the EPPs into law. Gov. Andrew Cuomo vetoed the bill after Bloomberg sent him a letter saying the measure would interfere with the city’s “business judgement.”

Though the court decision applied only to pre-kindergarden routes, it is being used to attack the job security across the board. Special needs drivers and attendants are up first.

“If the EPP is not inside the contract,” says Fuerges, “then we just loose our jobs and that’s that. They’ll just hire a hundred drivers at a lower rate without the experience and we’ll loose everything.”

Carin van der Donk, the mother of a 13-year-old with autism, stands with the ATU. She’s on a first name basis with the team who chaperones her child and she sees the attack on the union as an assault on the quality of her child’s education. “All these special need kids get on a bus every morning – 6:30, 7 am – and sit there for hours. They exist during that time and they need to have qualified personnel. That personal needs to be treated with respect and needs to be paid a living wage.”

Special needs transport constitutes three quarters of the city’s $1.1 billion busing budget, which Bloomberg wants to slash in half. Children with mental and physical disabilities as well as those with behavior disorders would bear the brunt of the mayor’s cuts, since senior staff would be thrown to the curb.

“I like to work with special-ed children” says Fuerges. “Some of these kids don’t come from good families. I feel like not only can I drive them but I can give them some type of education about life. I’ve seen bad kids turn to good because they can understand that I can relate to them and that’s important.”

Rather than undermining the job security of people making $35,000 a year – the average driver’s salary – critics say the city could save money by reconfiguring its complicated network of routes, a web that has grown all the more entangled during Bloomberg tenure. The mayor has closed over 100 neighborhood schools and is gradually pushing the city towards a charter school model, meaning more students traveling greater distances to get to the classroom.

Local 1181 won the job protections it is fighting for in a bitter, three-month strike in 1979 that saw New York City corrections officers step in as scabs. In what was dubbed “Operation Kiddie Lift,” jailers drove children to school in buses normally used to transport prisoners to Rikers Island – essentially, cages on wheels.

This time around, if Bloomberg manages to break the union he will have succeeded where his predecessors including Edward Koch and Rudolf Giuliani failed. While Koch and Giuliani sat down with the union and negotiated, Bloomberg has not.

And that is because he’s got a weapon up his sleeve that those who came before him didn’t: complete mayoral control over the school system. Under a 2002 law that Bloomberg himself championed, the Wall Street mogul has the ability to stack the city’s Department of Education governing board with hand-picked favorites. Members of the Panel on Education Policy can be plucked off the board at any time, ensuring Bloomberg gets his way.

Mayoral control has not only been bad news for the school bus union, but teachers and students have also been hit hard under Bloomberg’s reign; 140 schools have been shuttered since Bloomberg took office in 2001. Another 27 are slated for closure this year.

Under attack from the same forces of austerity, teachers and drivers are now working together. The Movement of Rank-and-File Educators, or MORE, the social justice caucus of the union representing city teachers, has voiced support for the striking drivers, and teachers have been walking the picket-lines in front of bus depots in the wee hours of the morning.

On the other side of the aisle, a consortium of bus contractors has filed complaints with the National Labor Relations Board to force their employees back behind the wheel. They claim the Local 1181 has no right to strike since their conflict is with the city, not their employer. In the meantime, the contractors are rushing replacements through training.

All of which makes Tuesday a potential make-or-break for the strike, as the National Labor Relations Board is expected to issue its ruling. If the board emerges from its den of legal study and declares the strike legit, the battle could continue into the winter. It may be we also see a freshman crop of scabs start attempting to wheel yellow buses out of garages.

But first, they’ll have to get past Sergio Fuerges and thousands of his colleagues who are refusing to watch their livelihoods be driven away.

A version of this article first appeared at Occupy.com.

The sublime madness of the revolutionary »
« “Rising against the privileged minority of the earth”; the legacy of MLK