About 300 Brazilian Indians have decided to end their three-week occupation at one of the work sites of the Belo Monte dam in the heart of the Amazon rainforest. Both the Norte Energia consortium heading the hydroelectric project and activist groups assisting the Indians say the protesters left the work site. The consortium says it promised to help monitor Indian lands to keep outsiders at bay and establish committees to monitor the environmental impact of the dam.

Three hundred members of Brazil’s indigenous community have been occupying a key section of a potential hydroelectric dam along the Xingu River since mid-June. While delegates from countries around the world gathered to discussed sustainable development goals at the UN’s Rio+20 conference in Rio de Janeiro, members of various Amazon tribes drove workers for the energy consortium Norte Energia from the construction site of the Belo Monte Dam, an $13 billion project that will displace tens of thousands of people and flood huge swaths of rainforest in the state of Pará. 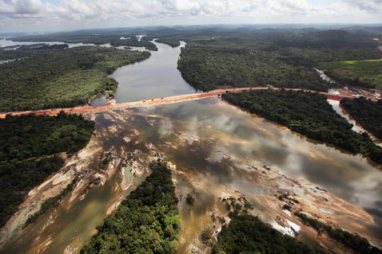 Amazon Watch, a group fighting Belo Monte, warns that it will divert up to 80% of the Xingu River from its original course.

Belo Monte has been in the works since 1979. Until now, the closest the project has come to construction was ten years after its initial conception, but in 1989 local and international pressure was able to halt the dam before groundwork got underway. Since then, the Brazilian government has gone back to the drawing board. But critics say thirty-three years later Belo Monte is the same damn dam.

Amazon Watch, a group fighting Belo Monte, warns that it will divert up to 80% of the Xingu River from its original course, “causing a permanent drought on the river’s ‘Big Bend’… directly affecting the Paquiçamba and Arara territories of the Juruna and Arara indigenous peoples.” The dam will also flood 120,000 acres of rainforest, forcing 20,000 people in the surrounding area from their homes.

While Belo Monte has been touted as a green electrical source to meet Brazil’s energy needs, Philip Fearnside of the National Amazon Research Institute has calculated that the flooding of forests from Belo Monte’s reservoirs will generate massive amounts of methane, a greenhouse gas that is 25 times more potent than CO2. A study conducted by the World Wildlife Fund estimates that by 2020 Brazil could cut its expected demand for electricity by 40% through investments in energy efficiency. Energy saved would be equal to 14 Belo Montes. But the dam project has more to do with expanding the profits of Brazil’s energy sector than with meeting electrical needs.  Belo Monte could open the floodgates to sixty other dams the Brazilian government wants to build in the Amazon Basin over the next twenty-years.

The Brazilian government has gone back to the drawing board. But critics say thirty-three years later Belo Monte is the same damn dam.

As indigenous farming and fishing communities who depend on the Xingu are displaced, a new labor pool is projected to flood into the area. Norte Energia claims Belo Monte will create upwards of 40,000 jobs. But the majority of those will be in the dam’s construction, only 2000 jobs will be permanent. An estimated 100,000 people are expected to pour into Pará looking for work. What happens when those seeking employment are turned down or when the jobs that exist run dry? Amazon Watch and other environmental groups caution the wave of excess labor into the region will cause illegal logging and cattle ranching to spread deep into previously uncut sections of the Amazon and lead to further indigenous displacement.

In a previous agreement with indigenous tribes Norte Energia pledged to construct schools and health facilities for those displaced. Tribes most effected by the multi-billion dollar dam have received incremental installments of $15,000 from the government, with payments set to halt later this year. Bebtok, a Xikrin tribal elder said his tribe along with those of the Juruna, Arara, Parakanã, Kuruaya and Kayapó decided to occupy the dam site because their voices were not being heard. “We would not be here today if the builders and the government would have done what they promised us. In my community, nothing has been done. There is no quality health post, there is no school, they have not built a road for us. My road is the river and that is going to be dried up.”

The irony that representatives of government’s from around the world were gathering in Rio de Janeiro to set sustainable development targets while tens of thousands of fishers, small farmers, and members of Brazil’s indigenous tribes are threatened with displacement by a massive hydroelectric dam has not been lost on communities fighting the project. In the town of Altamira, not far from the site where Belo Monte could be installed, they gathered to commemorate twenty-three years since a grassroots resistance blocked the first the dam and to discuss how to do it again. Unlike the Rio+20 conference, which, in the word’s journalist George Monbiot, produced “283 paragraphs of fluff”, Xingu+23 ended in action.

On June 15th, locals set to be displaced by Belo Monte marched up the Transamazon Highway and together with shovels and pick axes opened up a temporary earthen dam laid by Norte Enegia’s bulldozers, restoring the Xingu’s natural flow.

The action was largely symbolic however and did not culminate in a lasting occupation. But six days later, indigenous tribesmen visited the site once again. Instead of bringing digging gear they arrived carrying clubs and spears. No blood was spilled however as frightened workers fled, forgetting keys to construction equipment which the tribes have since refused to return. They have set up camp along the dam and have not budged for going on three weeks.

Antonia Melo,with the Xingu Vivo Movement says Belo Monte will not be built. “We, the people who live along the banks of the Xingu, who subsist from the river, who drink from the river, and who are already suffering from of the most irresponsible projects in the history of Brazil are demanding: Stop Belo Monte.” Those who live along the Xingu have pledged to continue to stand up for each other and they will need all the support the international community can muster.

Fukushima: a disaster spawned in the boardrooms of the 1% »
« Dirty power is sucking our rivers dry